The collaborative novel, Army of Brass, was released last Friday. You can read the Launch Announcement here!

The Collaborative Writing Challenge (CWC) is a series of novel projects in which a large group of authors contributes to a single novel, with each chapter written by a different writer! I was lucky enough to have two of my contributed chapters included in the CWC’s steampunk novel, Army of Brass.

You can read an EXCLUSIVE excerpt of one of my chapters below! If you like what you see, please go purchase the ebook on Amazon, and don’t forget to rate the book when you’re done!

Antikythera gleamed ahead as the Wayfinder approached the capital. It was not Tom’s first trip to the city, but it still amazed him. Given this bird’s-eye view, it was easy to believe the legends of its origins.

Supposedly, the city came into being even before the time of the automatons. And like the automatons, it was once a moving, mechanical city. The tales disagreed about the extent to which such a place moved. Some said the buildings rearranged themselves within the city limits, depending on what shops and taverns were open, what events were underway, and whatever the king had decided on a whim; others said the city itself could crawl across the land.

Antikythera certainly didn’t move anymore, if it ever truly had. Legends were such fickle things. Still, the city was uniquely impressive. Their facades of copper, brass, and smooth marble, combined with the colorful tiles of the roofs, made the buildings shine brilliantly in the sunlight. And then there were the gears. Some were small, hidden in crevices and in alleyways, while others could be seen clearly from the airship. They towered above the streets in the center and along the edges of the city, giving the beautiful place an imposing air.

Tom fidgeted as they prepared the airship for landing. “Mr. Davenport?” The Cartographer grunted in response as he squinted at a series of dials. “You said you would get us airships, even if you had to steal them.” Jack’s distracted expression remained unchanged. “I have two concerns. One, how confident are you, really, that the Cartographers Society will help us? And if they don’t… how exactly would you go about stealing airships?”

Jack gave Tom a thoughtful frown. “As to your first question, I am quite confident. However, I’m not really at liberty to discuss details. As to your second question…” He paused, contorting his face in a dramatic imitation of thinking. The Tinkerer clenched his fists and awaited the quite predictable answer. “I’m afraid I’m not at liberty to say.”

Tom’s repressed rage bubbled to the surface. “You are privy to everything Elaina and I are doing,” he said through gritted teeth. “Everything! But when it comes to your own plans, you tell me you’re not at liberty to say?”

“Who are you working for?” His face grew hot as he stared down the dandy pilot.

“I work for the Cartographers Society,” Jack replied. “You know that.”

“No, there’s more,” Tom insisted. “I saw you, speaking to that man in the street. Who was he? A spy? Are you working for the Hunter Baron?”

Tom reached into his pocket and pulled out his pistol. He wasn’t proud of how much it satisfied him to see the Cartographer instinctively raise his hands in submission.

“Where did you get a gun?” Jack asked, his voice rising in poorly masked panic. “Put that away. Firearms are extremely dangerous on an airship.”

“You came to Brasshaven after Fairport fell,” Tom sneered, ignoring the warning. “You want me to believe the Hunter Baron let you get away? Elaina might believe that, but I don’t. Not anymore.”

“Blast it, man, put your gun away!” Jack’s transformed as he shouted; the man was truly angry and frightened. Tom lowered the pistol, and Jack continued cautiously. “I am not working for the blasted Hunter Baron. The man on the street was a fellow Cartographer. I’ve been reporting to them about the automatons. Those metal giants have been… of interest for quite some time.”

“Of interest? What the blazes does that even mean?” Tom asked.

Jack frowned deeply, then the air rushed out of him in a resigned sigh. “You’re right. You and Elaina have entrusted me with a lot of information. It’s only fair I return the favor. When we meet with the Seneschal, you will learn the truth. I swear it.”

“Thank you.” Tom returned the pistol to his pocket with a smug smile. “It’s empty, by the way. Not even an ounce of gunpowder. Purely decorative.”

The Cartographer glared at him, then his face softened, and he chuckled. “Touché.” 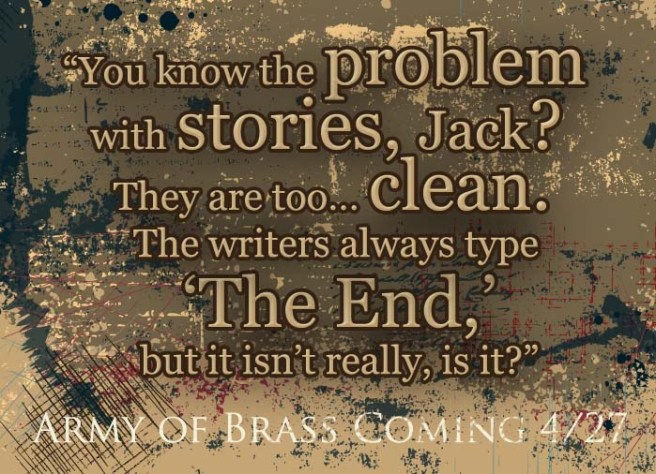 View all posts by Liz Hennessy